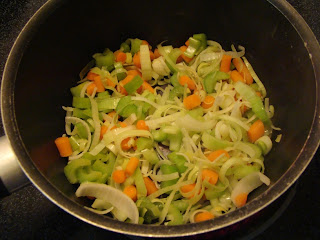 Heat the oil in a large nonstick saucepan over medium heat. Add the leek, carrot, and celery. Cook, stirring frequently, until the vegetables are very tender, but not browned, about 8 minutes. 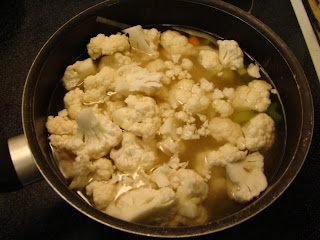 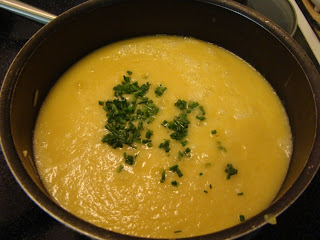 Add the broth and cauliflower; bring to a boil. Reduce the heat and simmer, covered, until the cauliflower is very tender, about 30 minutes. Stir in the cheeses until melted.

Remove the soup from the heat and puree with a hand-held immersion blender, or in a food processor or blender, in batches if necessary. Return the soup to the saucepan and reheat. Stir in the chives. Yields 1 1/3 cups per serving.

I didn't have any American cheese so I used cheddar and it was yummy.  I also put in more celery than it called for.  I pureed it in a blender and it popped the lid off and splattered all over.  I would recommend an immersion blender.  You'd never know it wasn't potato.  It had the same texture.  A great way to sneak in some veggies.
Posted by Valerie at 6:48 PM