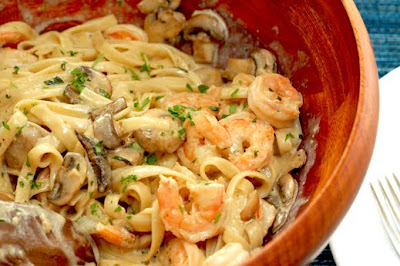 I guess you could say that today was All New Recipes day in the Nielsen house.


I found this recipe here and that's also where the picture came from. I have a house of seafood lovers so this was a giant hit here. I imagine it takes a lot like a shrimp Alfredo would, but I wouldn't exactly know because I'm not a fan of Alfredo. This is so yummy! It's easy to cook but paired with garlic bread and a green salad you could serve it at your fanciest of dinner parties. As I was cooking it I thought it would make a great anniversary or valentine's dinner. (Why was I thinking that? Who knows?!?!?!)


4-8 oz. fettuccine or linguine. (I used fettuccine. The author says she prefers less noodles but I had a family to feed. I used about 12 oz. of fettuccine.)

10 TBS butter (The author says, I know, but I've tried it with less and it's just not the same.)

1 TBS fresh basil, chopped. (The author says you can use dried herbs if that's all you have, but I(Kristen) know dried and fresh measurements are not the same and I don't think the flavor is as good with dried.
2/3 cup boiling water (from your noodle pot)
1 lb. cooked shrimp (feel free to buy frozen)

1. Boil and salt a large pot of water and cook your pasta.

2. While your pasta is cooking, cook your shrimp if necessary and reserve. If your shrimp are pre-cooked and frozen, quickly thaw them under running water.

3. In a large skillet melt 2 TBS butter over medium heat and saute mushrooms until soft and brown. Season with salt and pepper.

4. Reserve cooked mushrooms and melt remaining butter in the skillet. Add minced garlic, cream cheese and herbs. At this point, I generally fell like something has gone terribly wrong. The cream cheese doesn't really melt and starts to look almost curdled, don't worry about it It will all smooth out and be wonderful when we add the water, I promise.

5. Simmer cream cheese mixture until well blended. Get a scoop of boiling pasta water from your noodle pot and mix it in, stirring quickly to smooth out the sauce.

6. Keep sauce hot and add shrimp and mushrooms. Mix well and simmer (stirring often) until everything is hot and thickened, about 10 minutes. You won't ruin this sauce by accidentally boiling it so don't worry.

7. Toss sauce with cooked noodles and serve.
Posted by Kristen at 4:42 PM