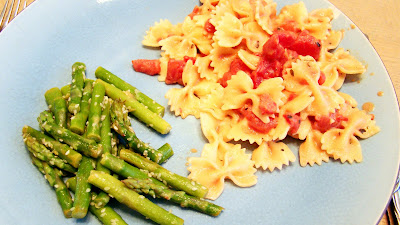 You can't really tell, but there is a pink sauce on the noodles besides just big pieces of tomato

Cook pasta according to directions. While cooking, melt butter in large skillet over medium heat. Add herbs and boullion. Stir until cube is dissolved. Add tomatoes and season with salt and pepper. Cook until butter has separated from tomatoes (about 5-10 min). Raise heat to medium-high and pour in cream. Cook, stirring frequently, until it has reduced by about half. Remove from heat and combine with cooked, drained pasta.
Posted by Frank, Heidi and Family at 9:35 PM